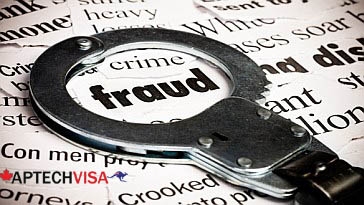 IRCC is very strict when it comes to deal in frauds and scams, without seeing who is at the fault, immigrant or immigration agency, they straightaway deport that person there and then. A recent case of immigration fraud has come into limelight where a 26 year old youth got arrested in Canada after being duped by a Mohali-based immigration firm. The victim Lovpreet Singh was arrested by the Canadian immigration department for submitting fake documents to gain admission in college. The fake documents were provided by the Orange Overseas Immigration and British Library Immigration.

The immigration company fraud work dates back to January when Lovpreet Singh, a resident of Chitamile village of Ropar district, contacted Orange Overseas to go abroad for higher studies after completing his graduation in engineering.

According to the complaint filed by Lovpreet’s mother SarbjeetKaur, her son had approached the said immigration consultancy for study visa. He was provided the study visa of Canada along with an offer letter of a college, where he was supposed to get admission. Apart from that, the accused alsp provided the victim with a college fees receipt. However, this document was declared fake by the college.

The FIR stated that after the college denied admission, Lovpreet contacted the accused who provided him another offer letter of a different college. Based on fresh documents, Lovpreet took admission in another college. However, the previous college had already complained to the immigration department and he was soon arrested.

Later, Lovpreet got bail and has been given time to show original legal documents.

The mother alleged, “We sent our son abroad for study by spending lakhs of rupees. But my son faced harassment there due to the fraud of the immigration company.”

Those four employees of the immigration company have been booked under Sections 420 (cheating and dishonesty including delivery of property), 465(punishment for forgery), 468(forgery for purpose of cheating), 471(document or electronic record) and 120-B (punishment of criminal conspiracy) of the IPC.

Therefore, the cases like these are lot heard and hence, it is very important to do double triple check before finalising your immigration agent.